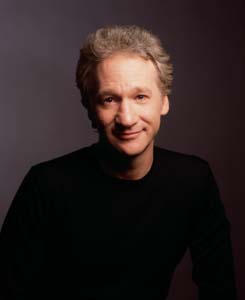 WASHINGTON, DC — The Green Party has sent an open letter to Bill Maher after a June 19 broadcast of ‘Real Time’ in which Mr. Maher said “[W]hat we need is an actual progressive party to represent the millions of Americans who aren’t being served by the Democrats. Because, bottom line, Democrats are the new Republicans.”

The Green Party’s reply to Mr. Maher: “Hey, Bill, we’re over here! What you described is the GREEN PARTY! We already exist!”

The progressive party sought by Bill Maher describes the Green Party: “Shouldn’t there be one party that unambiguously supports cutting the military budget, a party that is straight up in favor of gun control, gay marriage, higher taxes on the rich, universal health care — legalizing pot — and steep, direct taxing of polluters?”

The open letter urges Mr. Maher to acknowledge the Green Party and have a Green candidate or leader on the show. The text of the letter is appended below.

The Green Party is currently preparing for its annual national meeting, to take place in Durham, North Carolina, from July 23 to July 26. Reporters are invited to cover the meeting.

We were thrilled to hear you talk about us when you discussed the need for a new party — a “first party” — during the June 19 broadcast of ‘Real Time.’

The only part you left out were the words “Green Party.”

Here’s what you said:

“Shouldn’t there be one party that unambiguously supports cutting the military budget, a party that is straight up in favor of gun control, gay marriage, higher taxes on the rich, universal health care — legalizing pot — and steep, direct taxing of polluters? These aren’t radical ideas. A majority of Americans are either already for them or would be if they were properly argued and defended.”

“[W]hat we need is an actual progressive party to represent the millions of Americans who aren’t being served by the Democrats. Because, bottom line, Democrats are the new Republicans.”

Hey, Bill, we’re over here! What you described is the GREEN PARTY! We already exist!

Maybe you forgot about us because the major media have an aversion to mentioning the Green Party and our candidates. Maybe the FCC has banned “Green Party” along with the late George Carlin’s seven dirty words, “Chomsky,” “End the Drug War,” and other language that offends delicate sensibilities.

For the major networks, and apparently PBS and NPR too, the very idea of more than two candidates in an election makes talking heads explode.

If Green candidates started getting elected to higher office, the radical ideas that aren’t really radical would get a fair hearing and a chance of passage.

Imagine if a few Greens got seated in Congress. Greens don’t take corporate contributions, so they’d be immune to the influence of Exxon-Mobil, Goldman Sachs, Bank of America, Raytheon, Monsanto, etc. When Rep. Nancy Pelosi sends out orders not to seek a probe of Bush-Cheney officials who authorized torture dungeons, Greens could tell her to take a hike.

A few Green congressional victories would cause a seismic shock to the political landscape. Democrats would no longer have Republicans as their sole competition. The scope of national debate would no longer be Dems on the left, Repubs on the right, a phony middle ground between them, and a narrow range of political ideas comparable to the corner grocery limiting your choice of beverage to Coke or Pepsi.

With some Greens in Congress:

• Democrats couldn’t pretend to be the antiwar party while voting for more war funding.

• Single-payer national health care would be on the table and might even pass. President Obama and most Democrats already know single-payer is the best proposal. But they feel compelled to appease the health insurance, pharmaceutical, and other lobbies and find common ground with Republicans who believe the free market has sufficient mojo to cure every illness and injury.

• We’d hear the truth: that “emissions trading” is a license for corporate polluters to keep polluting, that “clean coal” is a plot to turn West Virginia into a crater, that the trillion-dollar Wall Street bailout and confiscation of savings and pension money are the greatest transfer of wealth from working people to big banks in history.

There’s a bipartisan consensus that corporate profit margins always take precedent over Americans facing financial ruin over a health emergency or credit card debt or a mortgage or a lost job. Whenever you hear the word “bipartisan” on the evening news, check the silverware.

What are we going to do about this situation, Bill? If you really want a “first party” for America, will you throw us a bone on your show? Will you have a Green candidate or Green leader on once in a while? (Ralph Nader doesn’t count — he’s not a member of the Green Party.)

How about Rev. Billy Talen of the Church of Life After Shopping? Rev. Billy is now a Green candidate for Mayor of New York City (http://www.voterevbilly.org).

Rosa Clemente, our 2008 vice-presidential candidate, said that the Green Party “is more than an alternative, it’s an imperative.” Based on your comments, Bill, it sounds like you might agree with Rosa.

We look forward to hearing back from you. You can see what we’re up to on our web site .