The Green Party of Philadelphia’s candidate for Sheriff, long-time activist Cheri Honkala, recently opened an official campaign office.  Other news from the campaign is also below, including a protest against the current Sheriff of Philadelphia resuming sheriff’s sales.

From the Daily Record, on the subject of her campaign’s office:

In celebration of the office opening, the campaign has released the first in a series of tracks contributed by artists from all over the country inspired by Cheri Honkala’s bid for Sheriff of Philadelphia and her promise of “Keeping Families In Their Homes” by halting all evictions based in foreclosure. The song entitled “My Name is Cheri Honkala” can be found at the campaign’s BandCamp page, www.cheri4sheriff.bandcamp.com, and can be downloaded for a $1 donation.

A slideshow to accompany the song featuring photographs from famous documentary photographer Harvey Finkle can be found at the campaign’s YouTube channel located at YouTube.com/Cheri4Sheriff,, http://www.youtube.com/watch?v=FbbFJdZSQc8.

Supporters of the campaign can receive a print of one of the celebrated photog’s images that have documented Philadelphia’s activist community for decades with a $50 donation. Harvey Finkle was honored by the Bread and Roses Community Fund in 2009 and is actively documenting the Cheri Honkala for Philadelphia Sheriff Campaign.

From Philadelphia Weekly, regarding the sheriff’s sale protests:

Around 4:30 Monday afternoon, anti-poverty activist and Sheriff candidate Cheri Honkala stands outside Acting Sheriff Barbara Deeley’s Center City office. The veteran protester is joined by her son, Guillermo Santos, and a handful of supporters. She tells members of the press, some onlookers and passers-by that some day, she hopes we’ll all “live in a country that will make it against the law to throw families out on the streets, where people will stand up and say something.” She points at the office and tells the crowd that although 2,000 homes will be sold in sheriff’s sale the next day, “they haven’t even dealt with the corruption yet, in this office,” referring to $53 million the Sheriff’s Office hasn’t been able to account for.

Honkala has also been challenging the position of one of the several Democratic candidates running in a May 15 primary.  The candidate is generally seen as a reformer, and he would like to eliminate the office of sheriff entirely.  However,

Some critics of elimination, such as candidate Cheri Honkala say many sheriff responsibilities will be shifted to the courts if the office is eliminated, making it worse for those hardest hit by the mortgage crisis.

Finally, in a show of support from her hometown, a fundraiser is being held on April 29th in Minneapolis to benefit Honkala’s campaign:

Minneapolis – Artists Support Cheri Honkala for the “People’s Sheriff
Evictions and Sheriff’s-sale auctions of foreclosed properties are core issues for Cheri Honkala, this year’s Green Party candidate for Sheriff of Philadelphia. Originally from the Twin Cities, the two years that Cheri spent in Minneapolis between 2007 and 2009 strengthened her already firm resolve to struggle for the rights of homeowners during the onset of the foreclosure crisis.

The April 29th benefit at The Blue Nile in Minneapolis is one of many being held to support the Green Party candidate for Philadelphia Sheriff across the nation. Honkala is calling for people all over the country to run for Sheriff and put an end to evictions based in foreclosure in their communities. The candidate has received an outpouring of support from artists across the U.S., including the donation and dedication of original music to the campaign from artists Sir Ben Marx (NC), Shamako Noble (CA), Mic Crenshaw (OR) and many others. The election for Philadelphia Sheriff takes place in November, 2011.

Daisy Deadhead, a Green Party member in Greenville SC, has posted a number of photos of a Green Party endorsed “Rally for a Moral Budget” at her blog, Daisy’s Dead Air. The hour long demonstration was held at the State House in Columbia, SC. To see them, please click here 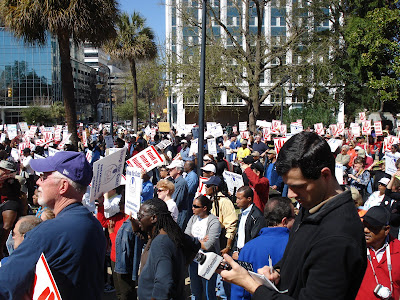 WASHINGTON, DC — Green Party leaders expressed puzzlement and outrage over the decision to award President Obama the Nobel Peace Prize, and urged widespread demonstrations against the wars in Iraq and Afghanistan to take place in Oslo, Washington, and other cities on the day Mr. Obama picks up his prize in Oslo.

“The chief difference between President Obama and President Bush on war policy is one of salesmanship. The international cooperation that the Nobel Committee praises means only that Mr. Obama has had more success in selling aggressive war policies — maintaining the Afghanistan and Iraq occupations, with plans to increase troop levels in Afghanistan,” said Jody Grage, treasurer of the Green Party of the United States (and a Norwegian-American).

“We hope that those who support the Nobel Committee’s decision and are proud of President Obama will join antiwar protests and urge Mr. Obama to honor the Peace Prize by ending the occupations,” Ms. Grage added.
END_OF_DOCUMENT_TOKEN_TO_BE_REPLACED

The Green Party of Allegheny County in Pennsylvania has announced that it is working with other progressive organizations to organize a demonstration and other activities in response to a meeting of the G-20 that will take place in Pittsburgh on September 24th and 25th this year. The Allegheny Greens write,

“The Group of Twenty (G-20) Finance Ministers and Central Bank Governors represents the world’s economic leaders, intimately connected to the most powerful multi-national corporations that dominate the global economy. Their neo-liberal policies have squandered billions on war, plunged economies into deep recessions, worsened social, economic and political inequality, and polluted the earth. We believe a better world is possible.”

The Allegheny Greens will take part in a People’s Summit being planned for September 19th, 20th and 21st. On September 25th, the Greens will join others in a march of protest against the activities of the G-20.

Updated information on the activist events can be found at the Thomas Merton Center.